With ever-growing technological advances, we are now able to easily reach anyone in the world instantly. Under such influences, Instagram marketing campaigns have created powerfully lasting results. Last year, one of the most successful campaign is undoubtedly hosted by GoPro, which increased their average engagement on Instagram per post throughout the year of 2014 grew by 57%.

As we slowly approach the end of the year, we have compiled a list of the 10 best Instagram marketing campaigns of 2015.

But before diving into them, you can use this Keyhole to track and analyze any Instagram campaign you want.

COMPANY: Guerlain
As one of the oldest French perfume houses in the world, Guerlain expanded its horizons, marching into the cosmetics industry in the late 19th century as the first company to manufacture lipstick.

CAMPAIGN: #Terracotta de #GuerlainTerracotta is a legendary bronzing powder developed by Guerlain 30 years ago that is already very popular amongst the brand’s existing customers; however, Guerlain wished to reach a younger audience base through digital media. In collaboration with Mazarine and Performics, Guerlain established a 4-week Instagram photo campaign targeting women in France to bring forth the connection between Terracotta and Paris — both classy and elegant.

“As a luxury brand, Guerlain has a rich history of producing beautiful creative. But with Instagram, we now have the tools to distribute that creative with precise targeting and we can measure the impact with incredible accuracy. This is a game-changer for us and Instagram is a natural home for our brand.”  – Jérôme Grange, Head of Media Guerlain 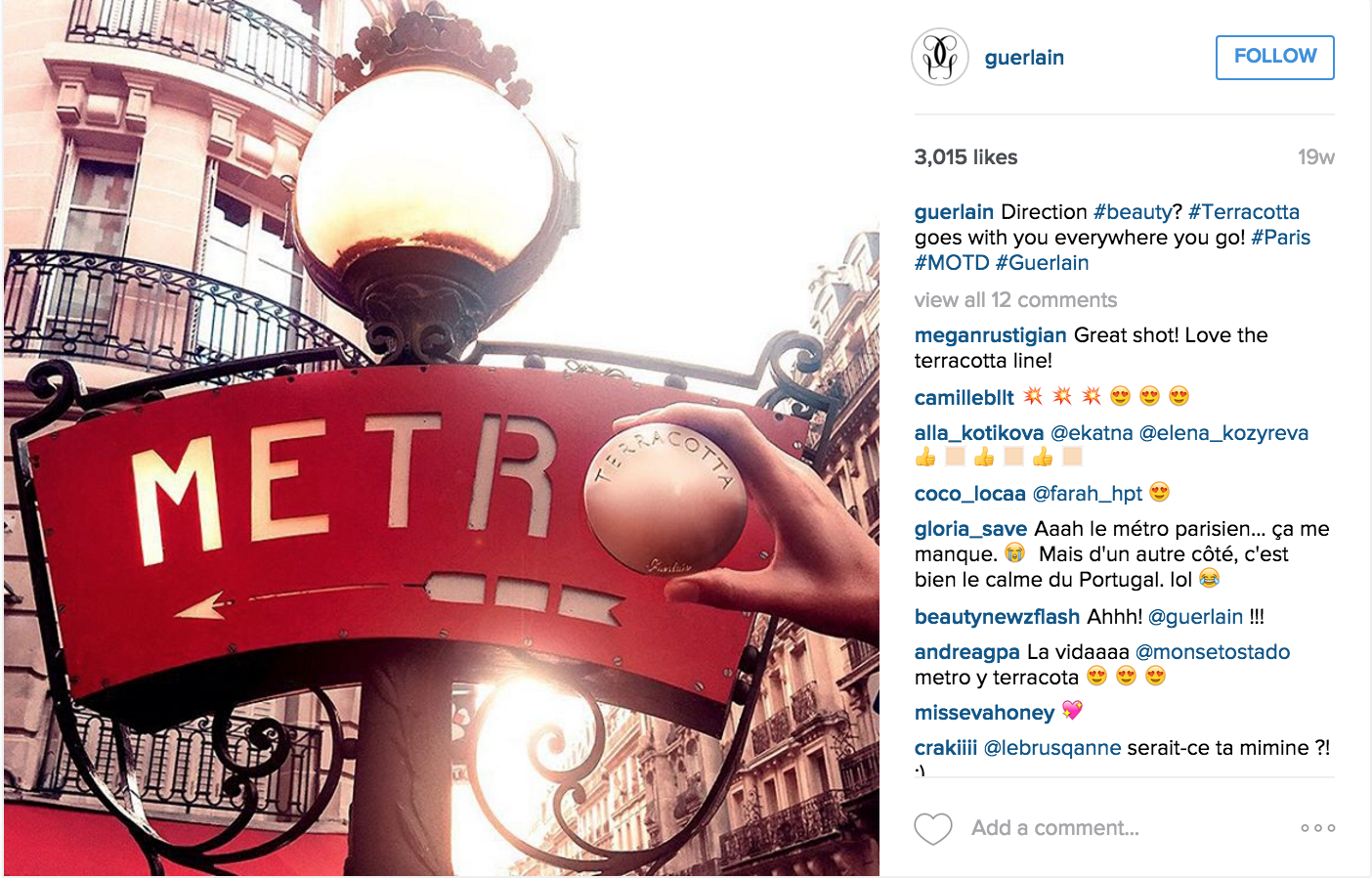 COMPANY: Bloom & Wild Just a small startup business in 2013, Bloom & Wild, a British letterbox flower delivery service has grown exponentially, reaching as much as £2.5m in growth capital. Aside from their innovative products, their innovative digital marketing strategies also set them apart from the rest of their competition in the industry. 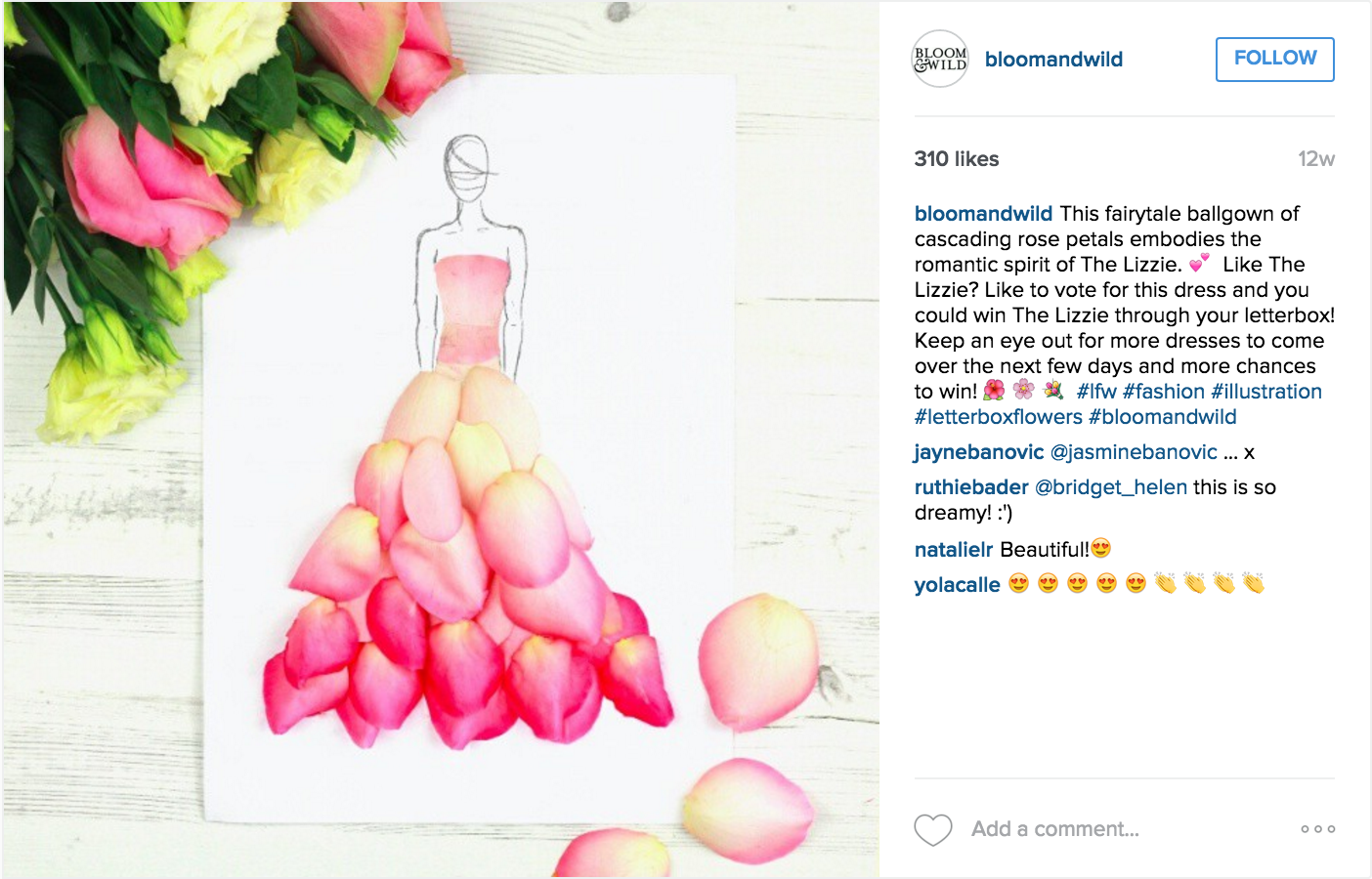 Recognizing the chance to attract a wider audience, Bloom&Wild grabbed the opportunity to launch an advertising campaign on Instagram, focusing on 3 key areas — “targeting the right people, testing formats to see which worked best, and sharing content that represented their business story.”

major growth of consumer base

COMPANY:  Scotiabank
Canadian companies also have their share in Instagram marketing campaigns. Scotiabank, the third largest bank in Canada by deposits and market capitalization, tested waters on Instagram in hopes of raising awareness for their credit card program, especially to young students aged 18-22. 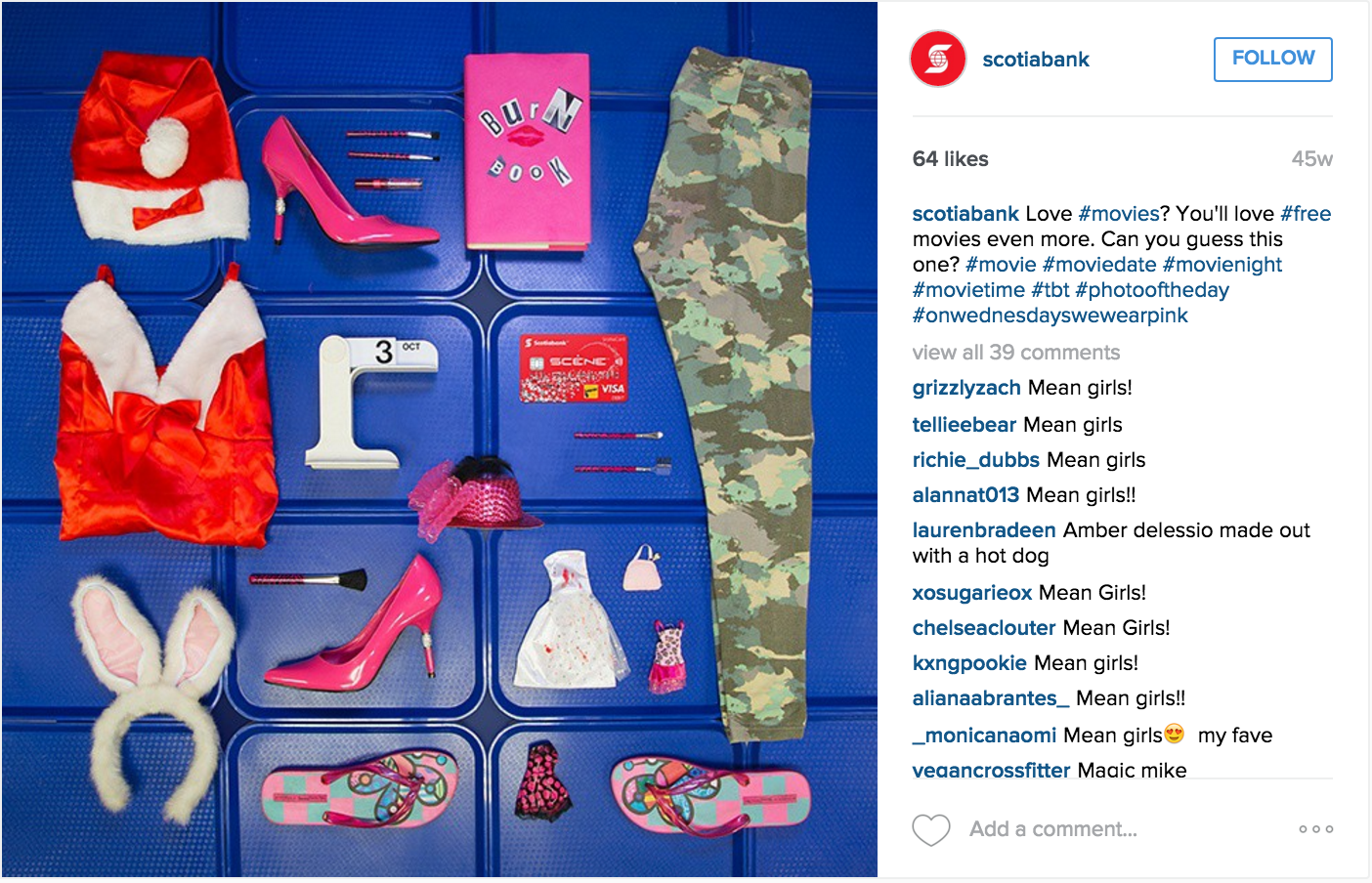 According to another Nielsen study, the campaign led to…

Air Canada,the flag carrier and largest airline of Canada, also stepped up their game, turning over to social media marketing for more exposure. To ensure their hard work pays off after much planning and organization for the addition of new destinations such as Panama and Rio de Janeiro, Air Canada wanted  to generate more awareness. 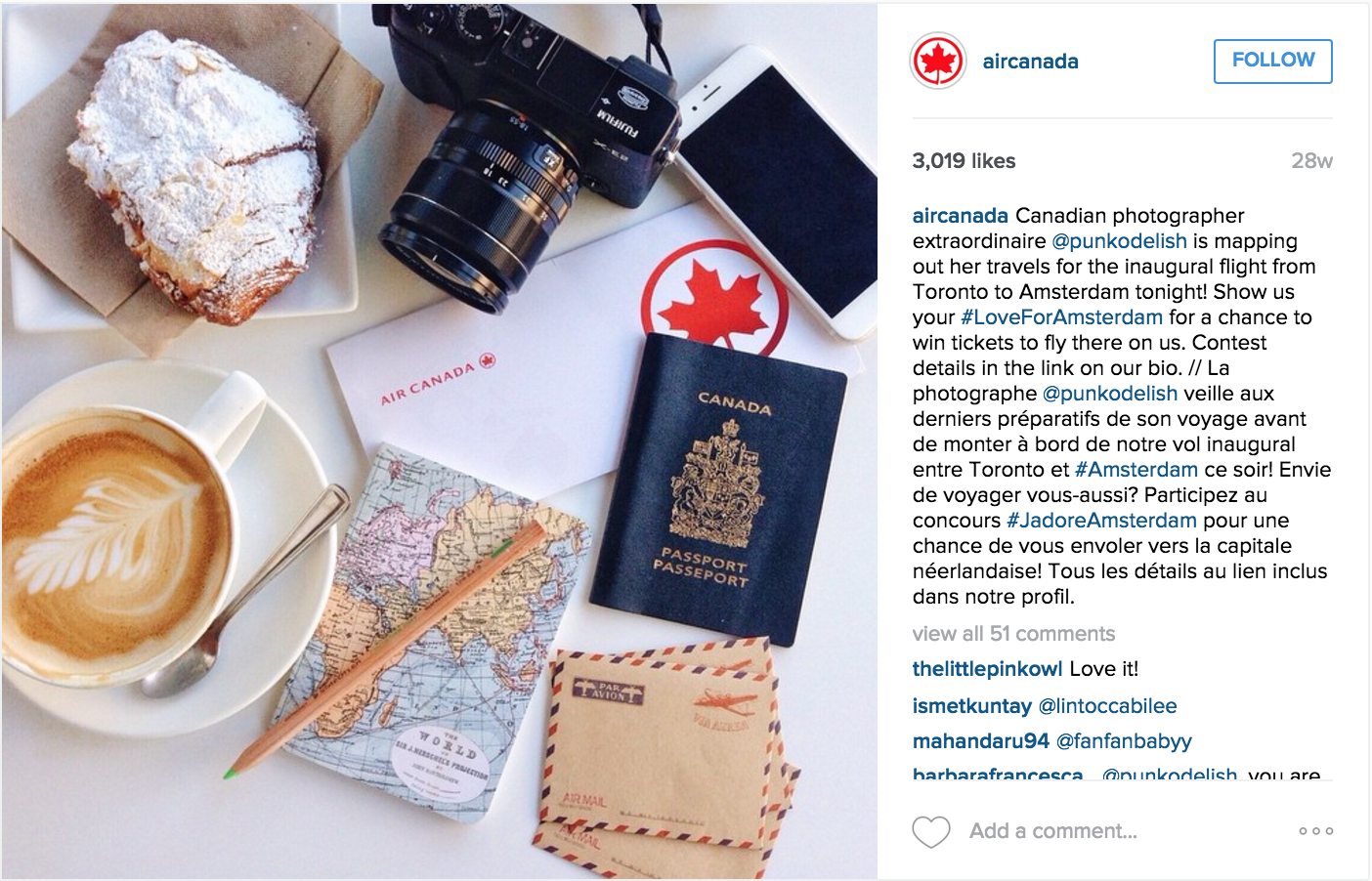 Thus, an Instagram photo campaign was designed; influencers, or social media celebrities, were hired to travel to each destination and post Instagram photos to promote local scenery and culture.

RESULTS: It may sound too simple to be true, but with the help of Instagram influencers, the campaign upheld by Air Canada reached…  29 point lift in ad recall 4 point life in message association

CAMPAIGN: Photos of models wearing the brand’s bright coloured cosmetics or just the products themselves were displayed on the company’s Instagram account for more brand awareness. 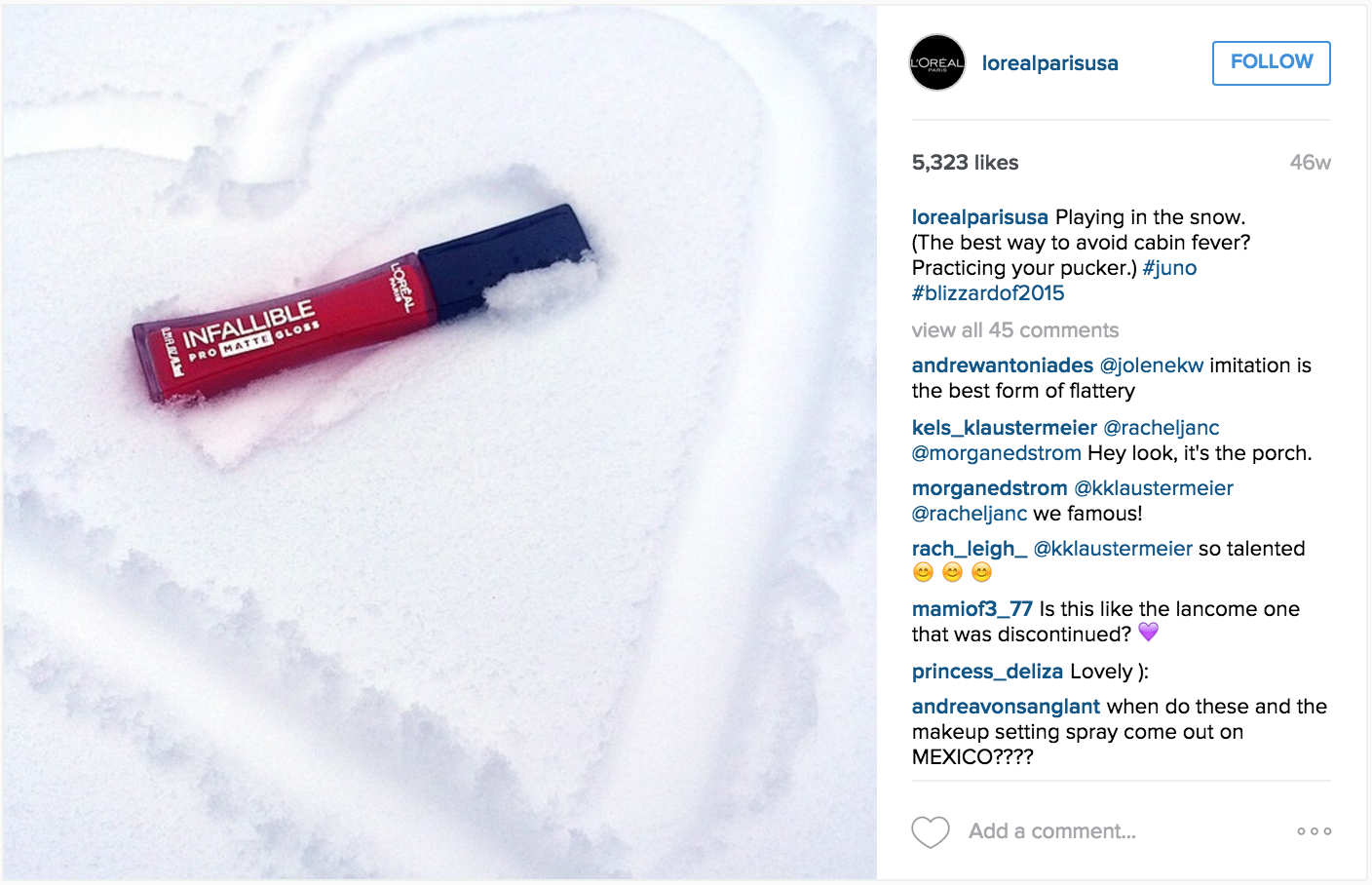 As a result, the colour contrasts brought a dazzling ending to the marketing campaign with…

7 point lift in recommendations from the target market

Also looking for more brand recognition and to increase brand recommendations, Canadian Tire, a retail company which sells a wide range of automotive, sports and leisure, and home products, joined the world of Instagram marketing. 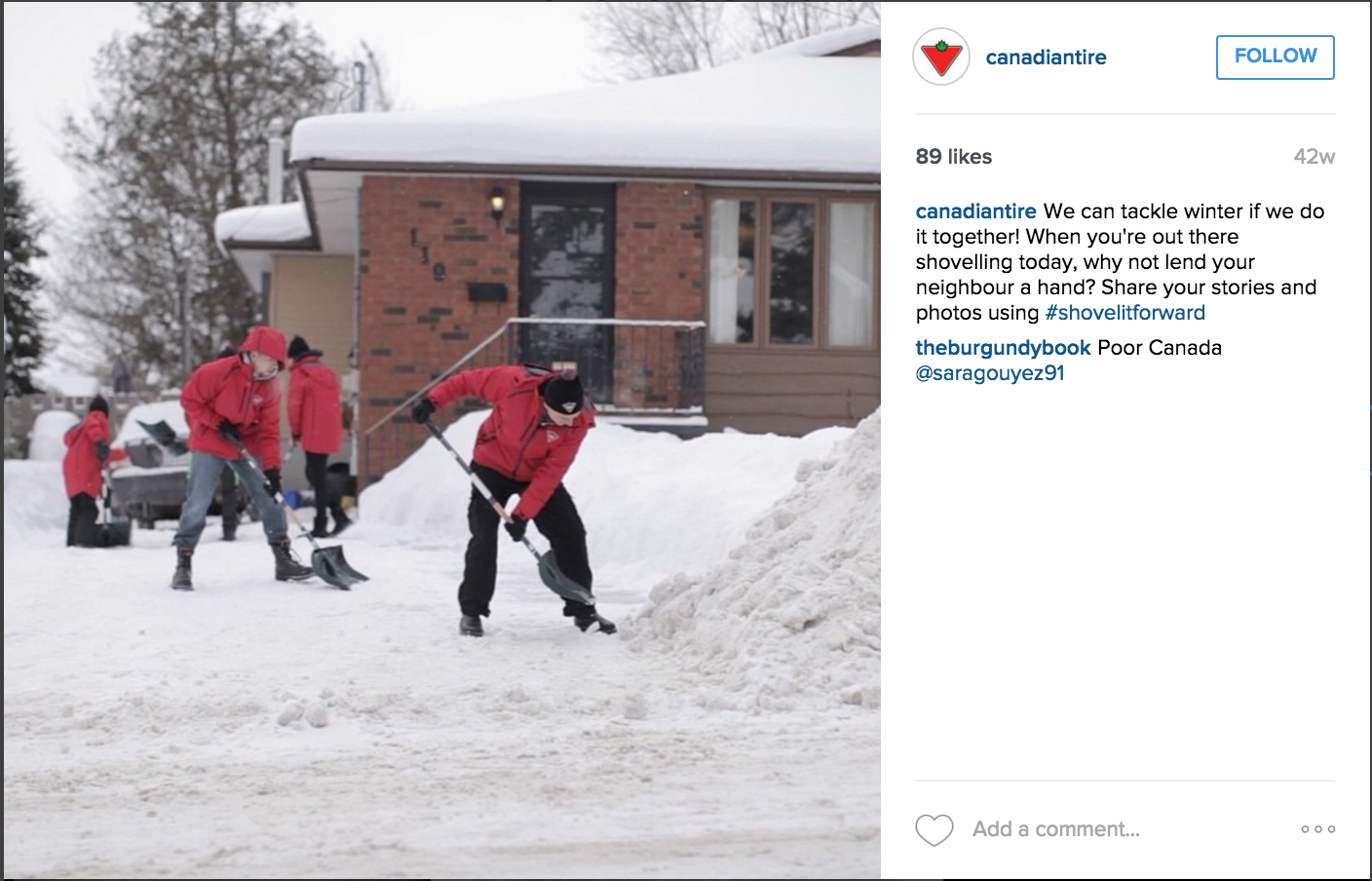 Unlike the other companies that only invested in photo campaigns, Canadian Tire experimented with promotional videos on Instagram. With the hashtag #ShovelitForward, Canadian Tire shared videos displaying the kindness of Canadians as neighbours help each other shovel snow out of driveways.

The goal of the company was to promote itself to a target audience who are between 25-34 years old, and the results were not disappointing

It may seem strange to see a fast food restaurant appear on the list of the Top Instagram Marketing Campaigns, but A&W definitely recognizes the potential of social media marketing and uses it to its advantage. The fast food company was proud to announce its commitment towards their big change as the “first national burger restaurant to serve beef, chicken, and eggs raised without hormones or steroids.”

CAMPAIGNS: To attract younger consumers who care more and more about healthy living and safe foods, a photo campaign on Instagram was launched emphasizing its choice of serving quality food with healthy ingredients. 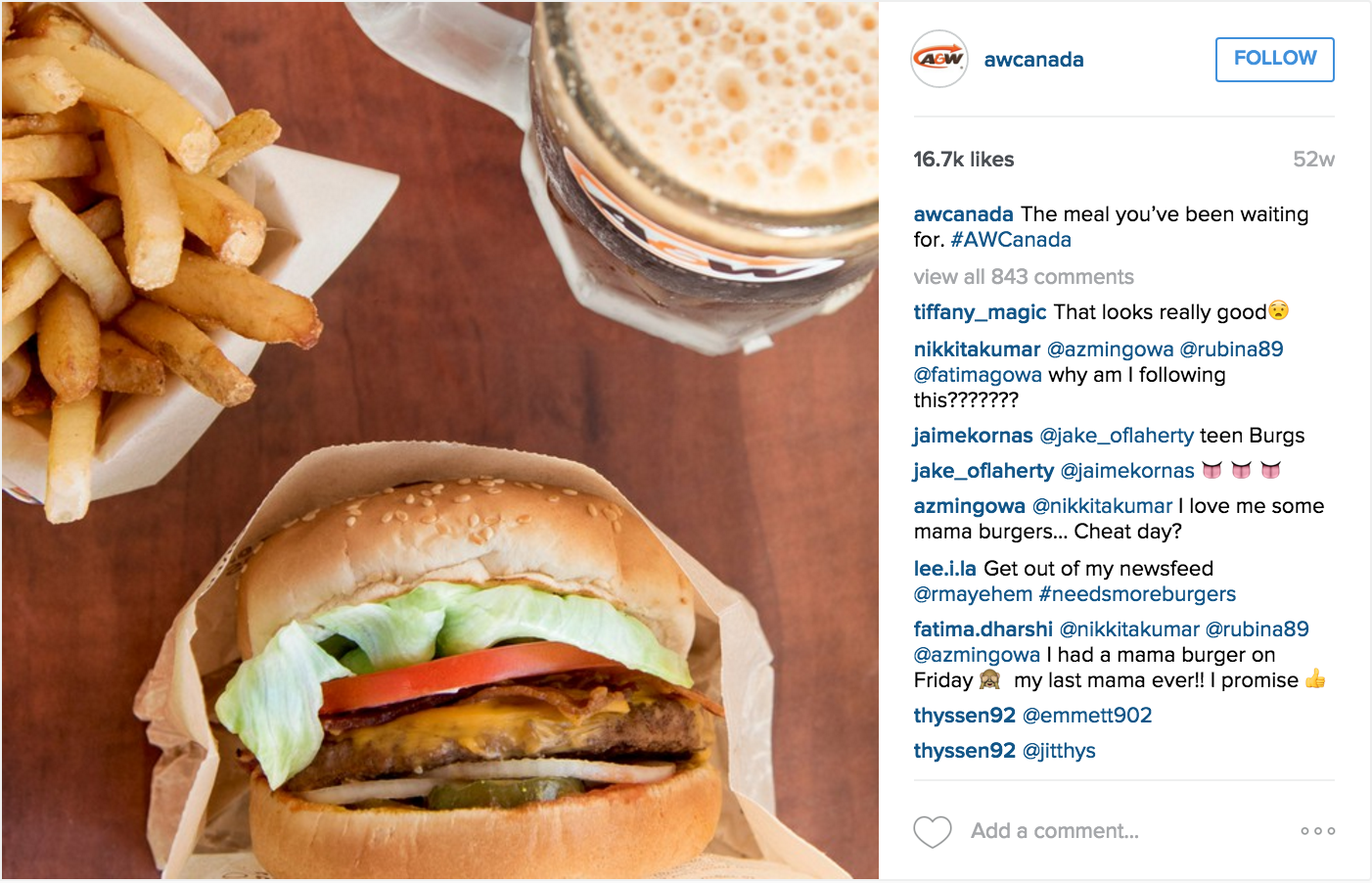 COMPANY: Poshmark Still relatively new, Poshmark— a small mobile and online marketplace for women’s fashion situated in Menlo Park, California—wants to increase app installs so as to expand its network of buyers and sellers. 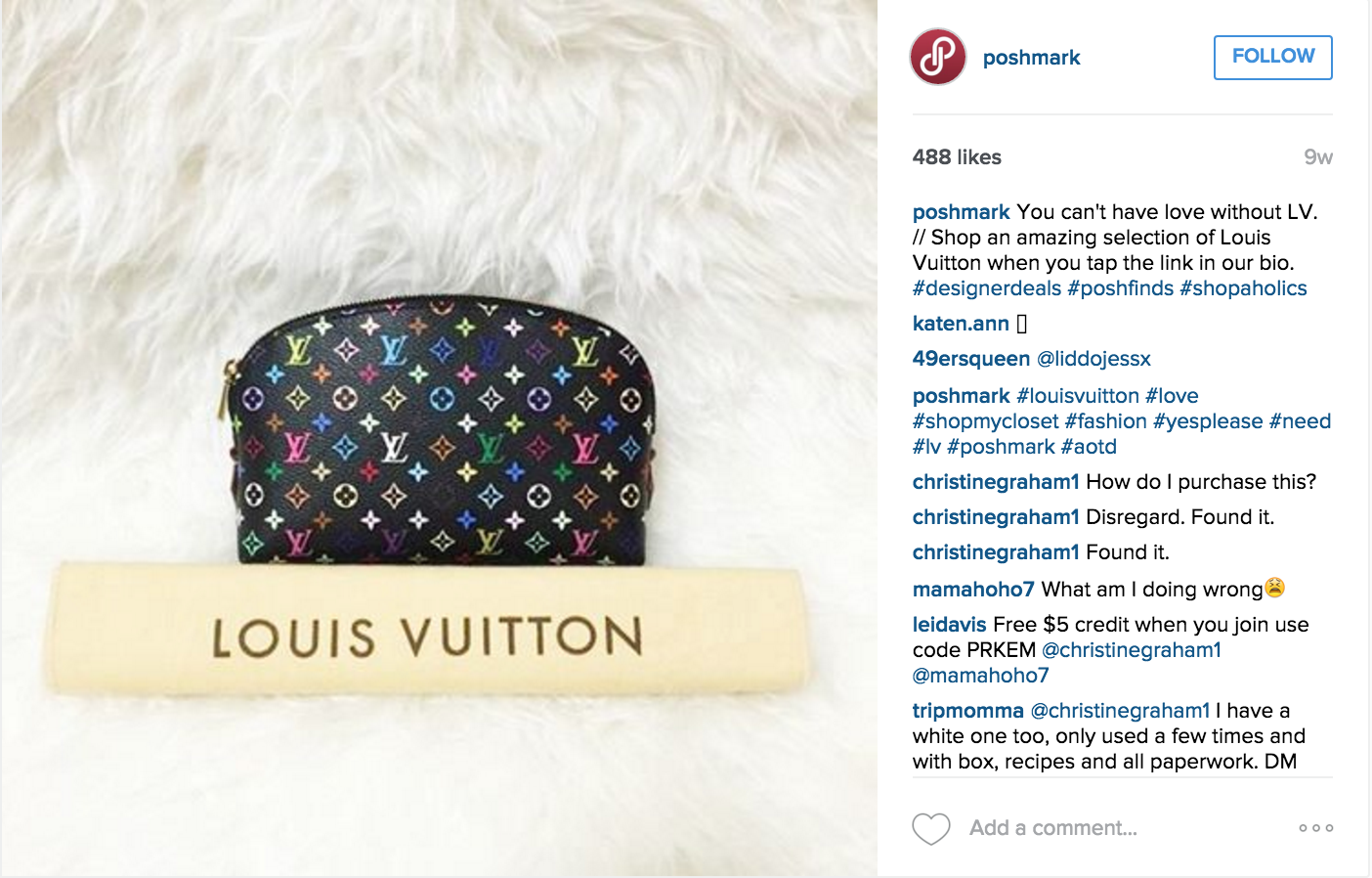 CAMPAIGN: Since Postmark has little influence as a brand, its campaign “borrows” the fame of luxurious brands and posted photos of high end products with captions enticing app downloads for discounts. Image Besides marketing on Instagram, Poshmark also invested in Facebook marketing.

RESULTS: With both combined, the brand surpassed its goals with an overwhelming… 37% increase in app installs   27% decrease in advertising costs 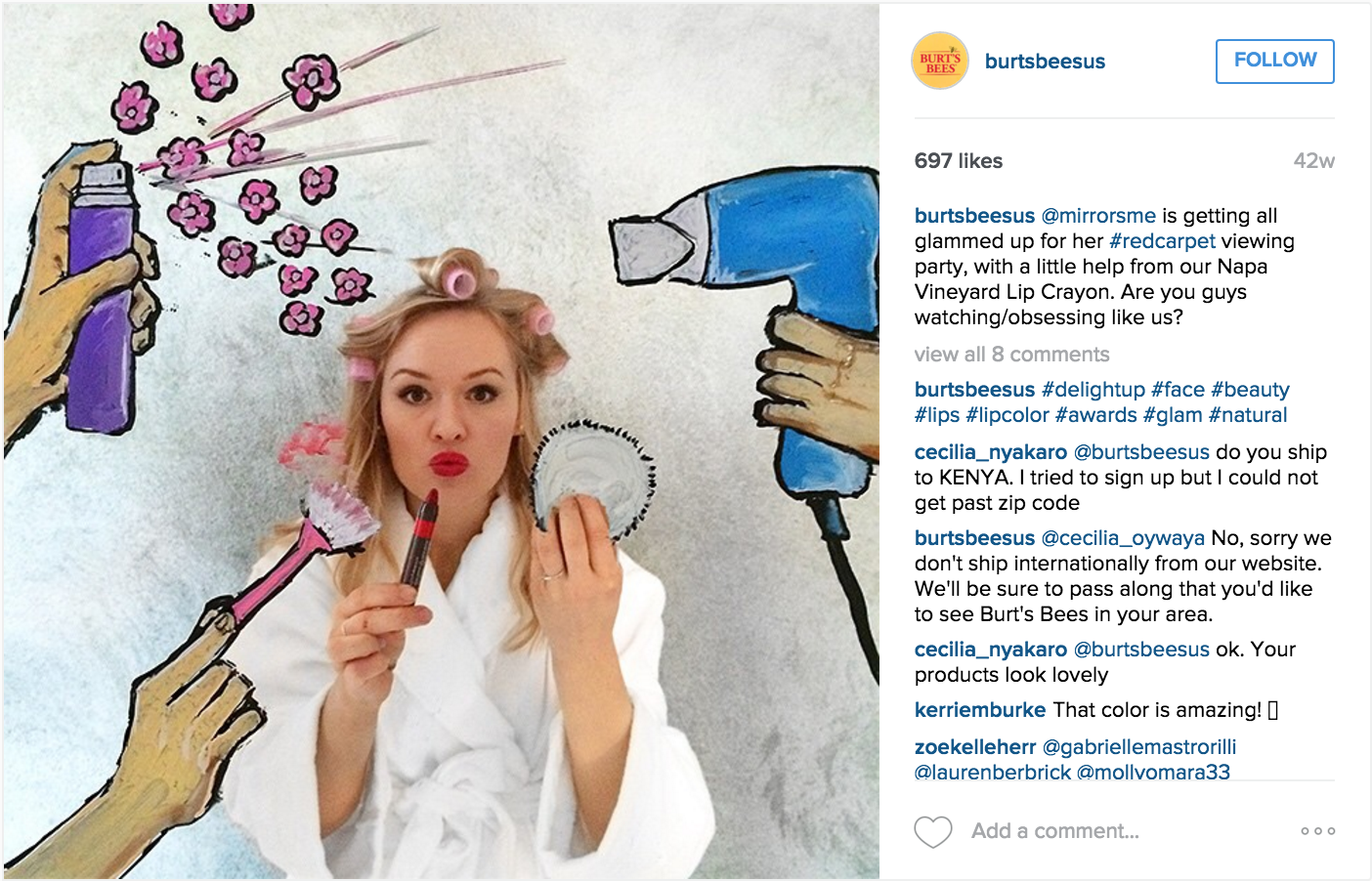 The company takes a very creative approach, creating cute, funky crayon drawings coloured with its own line of lip balm/stick colour, which aligns with the interests and tastes of its target audience —American females from 18-24. The main ideas behind #natural and #delightup on these playful crayon photos are to highlight its natural ingredients, and to showcase its wide selection of colours as well as the precision of the lip crayon.

After a month, the campaign generated …

16 point life in ad recall between control and exposed groups

5 point lift in product awareness between the same groups

“We are extremely pleased therefore with the level of social engagement for the #StandTall campaign which really resonated with the public. Having the likes of Thierry Henry and Kevin Spacey connecting with the campaign through our Twitter Mirror at the Awards also helped deliver fantastic social results.”

Its well-established relationship with The Prince’s Trust acted as a catalyst for it to run the #StandTall campaign for The Prince’s Trust Celebrate Success Awards — an award that “honour[s] the achievements of young people supported by The Trust who have succeeded against the odds, improved their chances in life and had a positive impact on their local community.” 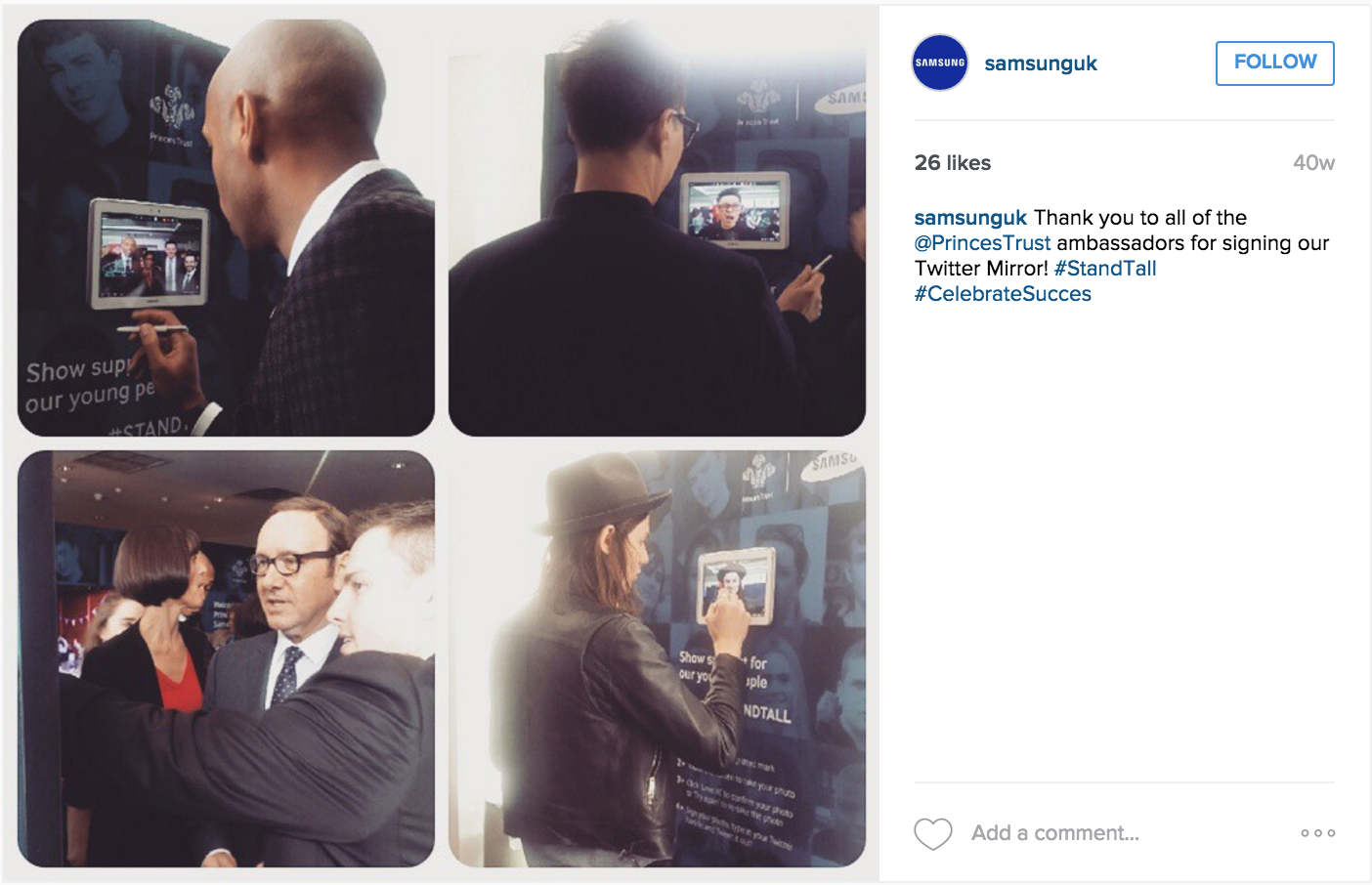 RESULTS: Through posting photos, selfies of participants of the awards ceremony on Instagram, as well as other social media sites, the campaign overall generated…

The cost per engagement was 7p, versus a predicted benchmark of 50p

Whether you like it or not, it’s a digital world. It’s amazing news, because now you are able to reach an international audience almost instantly. If you want to engage with more potential customers, especially young consumers, Instagram is a fantastic platform to market your company or products at low costs with high returns.