Engaging attendees on social media is a measure of an event’s success, even though planners and marketers typically face challenges when encouraging online action.

Social Media Marketing World 2016 is a case study on how to use Twitter to spur online activity from guests, as well as speakers and promoters.

Below is a look at how the meetup dominated the Twittersphere, which you can use to amplify your next event:

As the purpose of a hashtag is to drive and categorize conversations, tweeting once and ignoring resulting discussions can limit its effectiveness.

Doing so draws attention to neither the trend nor other users’ tweets.

Social Media Marketing World organizers encouraged attendees to frequently post and interact with each other by positioning Twitter as the go-to communication platform. They did this by:

Discourage one-and-done tweeting using the same approaches as Social Media Marketing World, and your next event should see a rise in hashtag impressions.

Activity from influencers — thought-leaders with large online followings — is largely responsible for earning almost a billion impressions for #SMMW16.

Whereas the typical Twitter user has less than 210 followers, influencers can have thousands or millions.

The value of popular users tweeting your hashtag is clear when examining the amount of impressions they earn.

Here are the top five #SMMW16 posters, in terms of total impressions during the event and a month leading up to it: 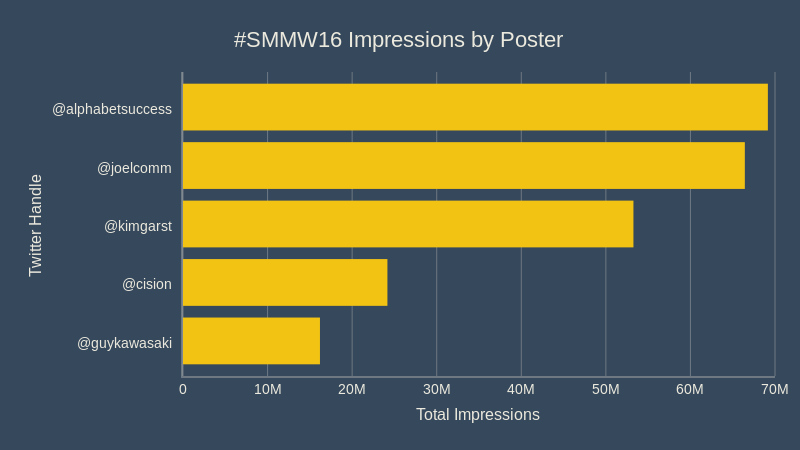 Similarly, many other users generated high impression numbers due to the volume of tweets they sent.

IPP (impressions per post) takes this into consideration. The metric averages the number of impressions a user generates, showing how many a single tweet earns.

Based on IPP, here are the top five #SMMW16 posters: 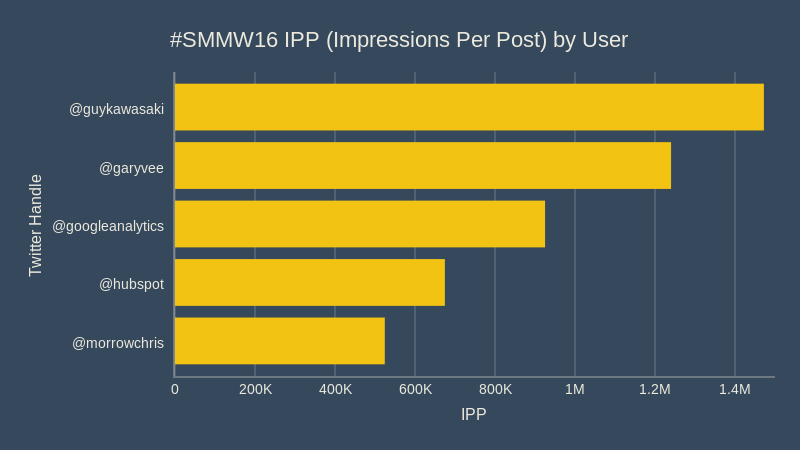 Whether you place more value on IPP or raw impressions, both numbers will rise as thought-leaders tweet an event’s hashtag.

READ: How Coke Generated $100,000 Worth of Free Twitter Impressions in a Day

It Used a Short Hashtag

Using a short hashtag over a long one makes it easier to tweet, which helps boost activity.

Including a space and the hashtag symbol, #SMMW16 only takes up eight out of 140 characters.

This allows people to easily post their thoughts, instead of struggling to work within Twitter’s limit. Plus, users have space to add in extra hashtags to increase exposure. 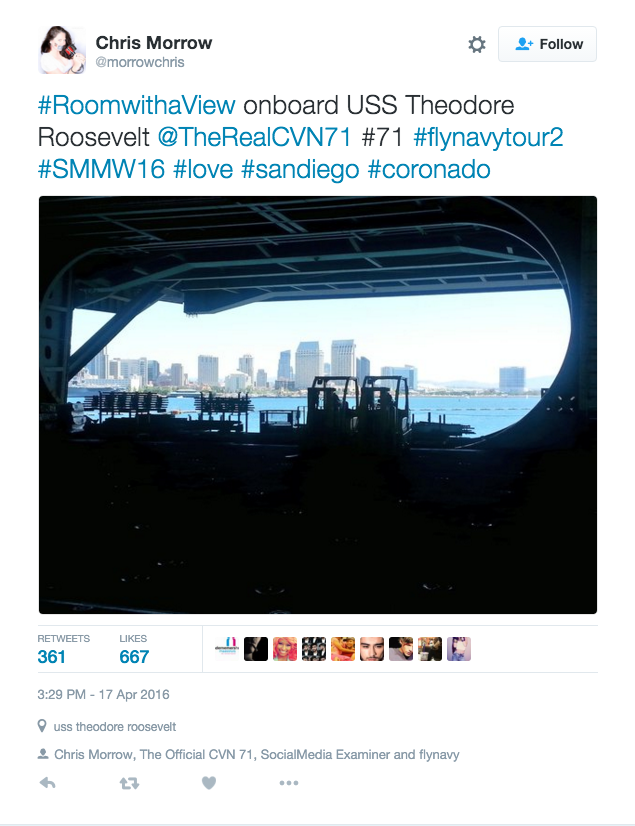 Keep in mind, data from Buddy Media — which researchers drew by analyzing engagement from more than 320 Twitter handles — suggests you shouldn’t include more than two hashtags per tweet: 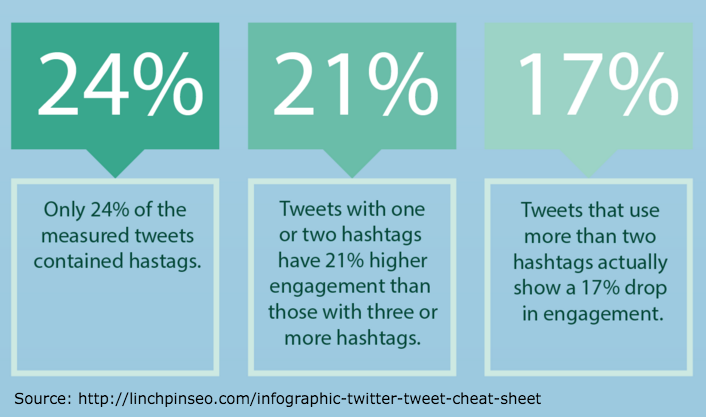 On top of these benefits, a short hashtag is also easier to type and remember than a long one. #SMMW16 is self-explanatory and to-the-point. It doesn’t need to be longer and couldn’t be shorter.

You likely won’t see much activity if a hashtag too difficult to key into a smartphone.

Sometimes, the biggest challenge to running an event that’s a social media smash is the first hurdle: Getting attendees to post.

Event marketers and planners may need a plan to incentivize attendees to take to social media, especially if audience members aren’t closely connected to their social profiles.

Social Media Marketing World overcame this obstacle due to the nature of its audience. Marketers and community managers were inherently incentivized to post because of their interest in social networks.

Specifically, they used the hashtag to: 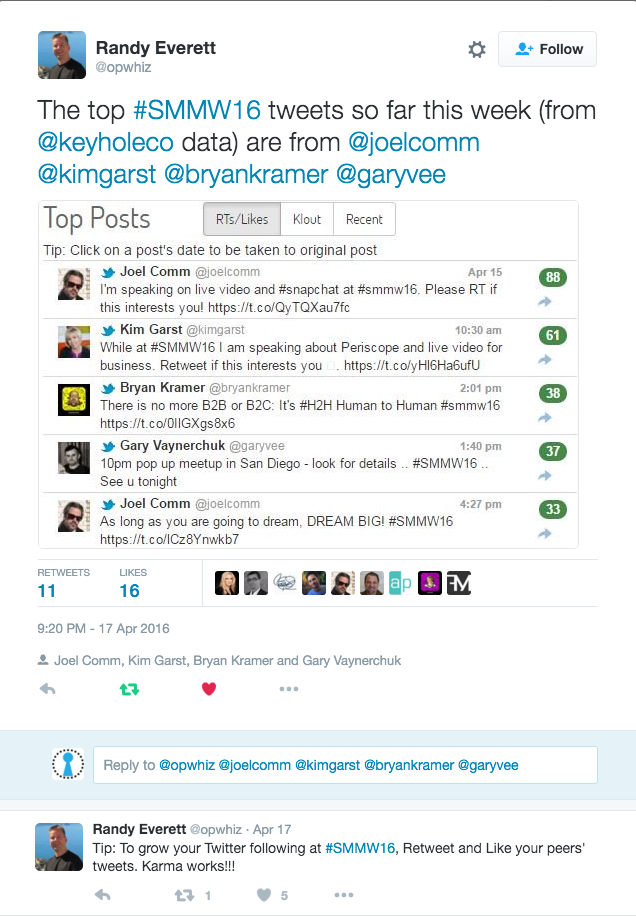 And since the bulk of people tweeted about — and during — presentations and workshops, almost two-thirds of posts came from mobile devices.

Based on its audience, an event may need original tactics to incentivize social posting. Your guests may not even hit the login button if you fail to address the need for encouragement.

Although each event differs based on its goal and audience, marketers and organizers can certainly use #SMMW16 as a case study about spurring guest participation and interaction on social platforms.

A billion impressions is a lofty target. But with the right combination of guests, thought-leaders and motivations to tweet, it may be more realistic than you think.

Keyhole is a tracker that provides keyword and hashtag analytics for Twitter and Instagram. Get started for free and search your brand now.