As brands and companies turn to social media to engage prospects while differentiating themselves, many marketers pick up Socialized!

Some call Mark Fidelman’s guide the “playbook” for social business.

As an executive and consultant with experience from startups to Fortune 500s, he’s now a Forbes columnist and managing partner at Evolve! — an agency in California that specializes in influencer marketing.

Covering how to refine your social media approach to build a larger and more active audience, Mark Fidelman is the fourth entry in our marketing influencer interview series.

Keyhole: In the first chapter of your book, Socialized!, you say that large corporations may not have competitive advantages in the highly-social and -digitized business age we’re in. In fact, you say large businesses may be at a disadvantage. Can you explain why?

Mark Fidelman: There are so many reasons, but the primary one is that these social networks don’t necessarily allow you to have more reach and access due to your organization’s size.

Anyone — including me as an individual person — can out-market you on a social network.

And it’s not limited to social networks today, as I wrote the book three years ago.

Now, you can include e-commerce platforms like Amazon. Some of our clients — the smaller ones — are outselling big corporations because of how nimble and socially-savvy they are. That’s not just because of their activity on the Amazon platform, but how they drive traffic to it. 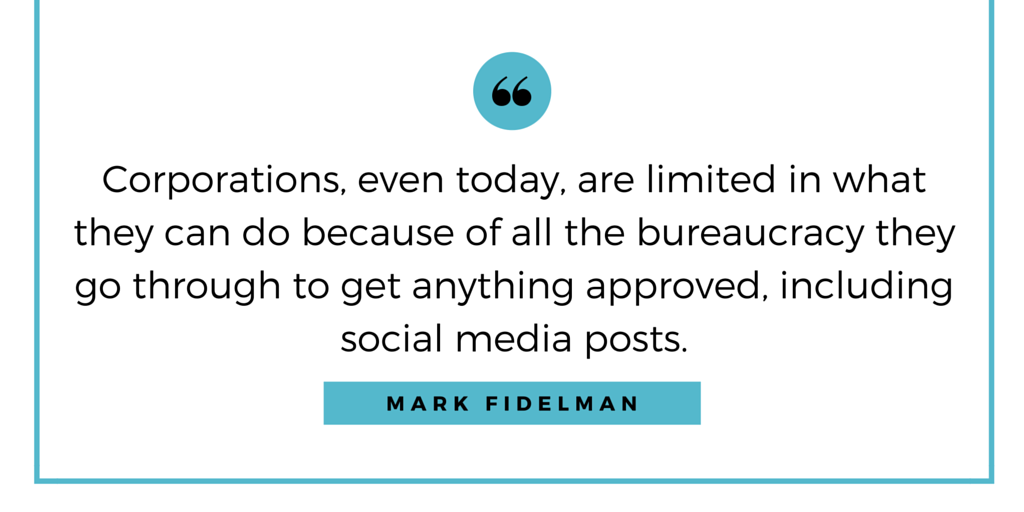 Corporations, even today, are limited in what they can do because of all the bureaucracy they go through to get anything approved, including social media posts.

There are some outliers — you can use Taco Bell as an example. But most of them are bogged down.

KH: How does your team at Evolve! approach social campaigns, keeping in mind that almost anyone can outperform anyone on social media?

MF: It comes down to creative, differentiated content that resonates with your target audience.

The step after that is making sure it’s distributed smartly. And what I mean by that is you don’t want to put all your eggs in one social network basket. You want to have paid advertisement and promotion on all the channels where your target audience exists.

Let’s say you create a 10-minute video on YouTube.

Those are two steps.

Then, there’s measuring it and making sure the content is resonating. If it is, double-down on it. Start throwing some more paid advertising or retargeting behind it.

Guide Your Tactics with Data Analysis and Reporting

KH: As you just touched on, how does your team use analytics and analytics tools to plan content creation and distribution strategies?

MF: We don’t do anything unless we can measure it. 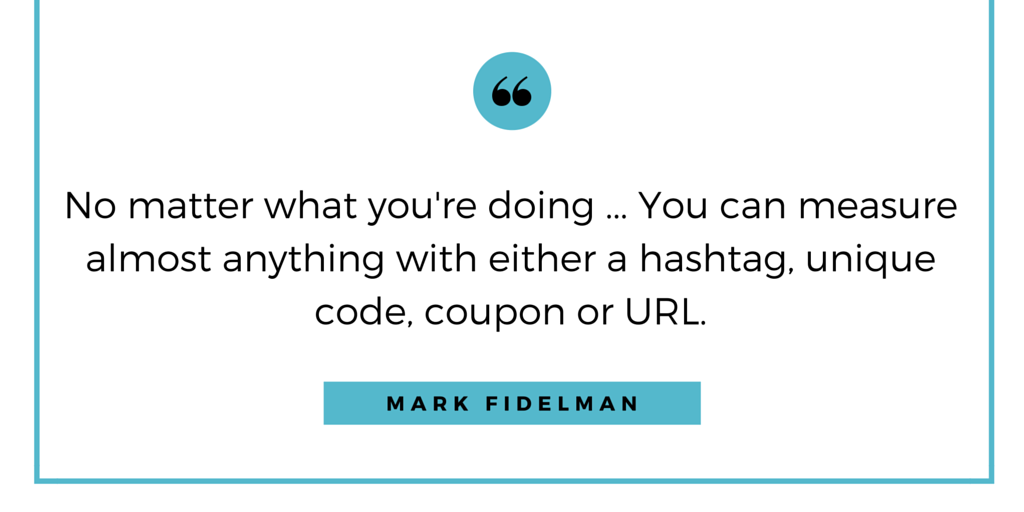 No matter what you’re doing — except for Snapchat, which I don’t recommend at this point — you can measure almost anything with either a hashtag, unique code, coupon or URL.

And then we have Google Analytics on both the landing page and the thank-you page if we’re trying to sell something, because we can track activity between those pages to see how many sales we’ve made without even logging onto our accounting system.

Everything is tracked and measured from beginning to end, or we won’t do it.

There are a few exceptions.

One is PR. We’ll attempt to measure it, but it’s just a wild guess. Or if the client wants to try Snapchat, we would have individuals take snapshots of what just occurred on the platform.

KH: For SEO and social media optimization, which tools do you use and recommend?

MF: For SEO, pretty much anything that Moz does. We’re sort of their followers at this point. The tools are great and we stick with them.

For social media management, we like Hootsuite. We use an Instagram-specific tool for that platform. For YouTube, we use TubeBuddy — a dependable tool if you’re producing videos, it’s a Chrome extension. For Amazon, we use Jungle Scout.

KH: Before so many tools became widely available, how did you track the success of a campaign?

MF: We kind of just pieced it together by looking at social shares, if they had them on articles. Or hashtags, in that we’d say “This campaign was better than our last because it got more hashtag mentions.”

It was very rudimentary. Now, fortunately, there are good tools. But we haven’t found that all-in-one great tool yet.

KH: That’s an interesting answer, since many people now see social shares as a vanity metric.

MF: It’s still important and I wouldn’t discount it. But certainly, conversions are the ultimate metric.

KH: Tracking success is one thing. Explaining the results is another. For those consulting, freelancing and in agencies, what advice do you have when it comes to sharing and explaining results to clients? 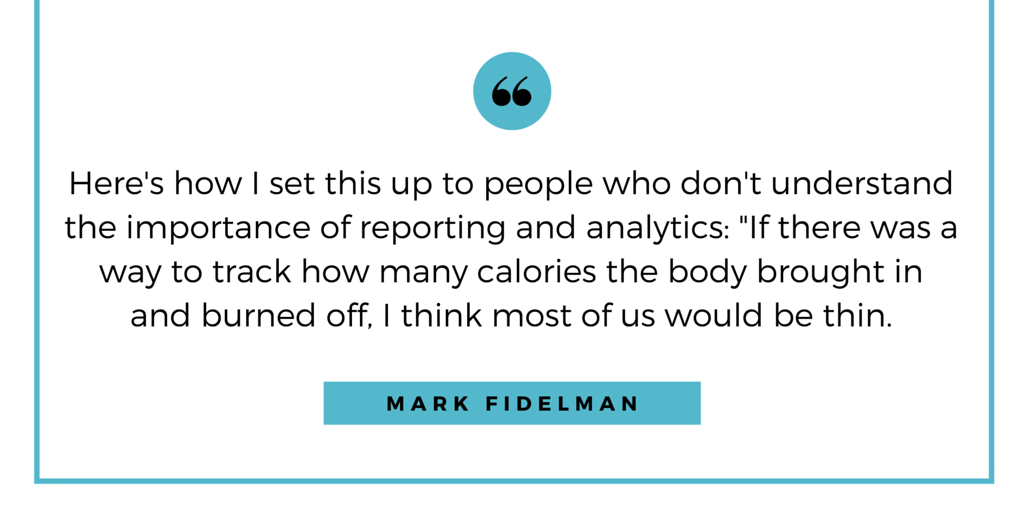 Here’s how I set this up to people who don’t understand the importance of reporting and analytics: “If there was a way to track how many calories the body brought in and burned off, I think most of us would be thin.”

Because we could see, every day, what we ate. Calories in, calories out. I don’t see a system like that happening for years.

And so, that system’s totally broken. We all get fat and lazy. Maybe not all of us, but the majority of us. And with all the temptations around us, it’s hard for us to get away from it all.

If you’re showing a client that what you’re doing isn’t working, but say “Here’s what we’re doing to resolve it,” that’s a positive thing.

That’s going to keep you on that account for a long time.

If you’re not providing those metrics, then you’re relying on the client’s whimsical or capricious nature to decide whether they keep you or not. There’s really no data to back up whether you’re succeeding or not.

You’re rolling the dice every month as to whether that company’s going to keep you or not.

On the flip side, if you’re the brand and not measuring what’s happening — especially in the marketing and sales space — I don’t know how long you’re going to be around. You can’t keep throwing money at things that aren’t working. And if you don’t know they’re not working, that’s even worse. 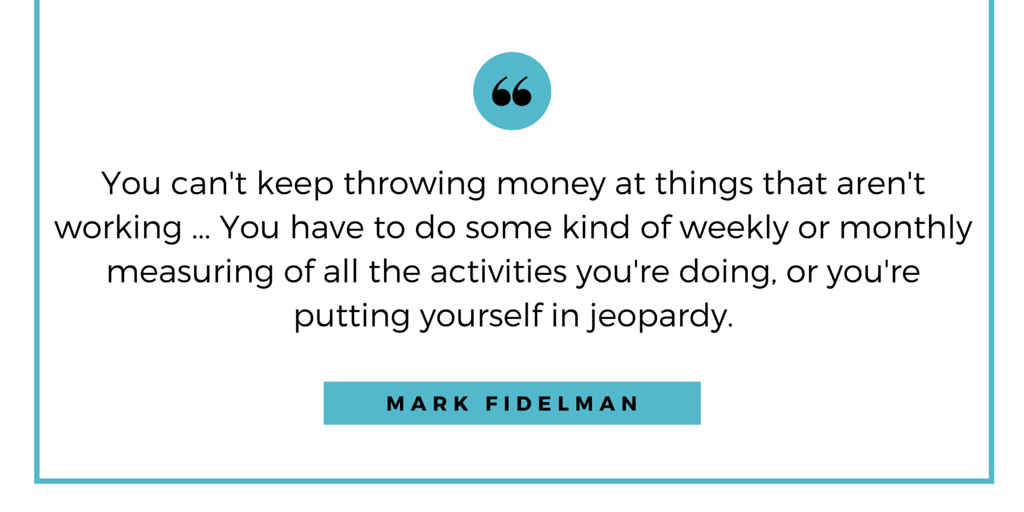 You have to do some kind of weekly or monthly measuring of all the activities you’re doing, or you’re putting yourself in jeopardy.

KH: As you can appreciate as a columnist and a content marketer, many writers face the challenge of creating posts, videos and graphics at a high rate. How do you recommend continuously crafting engaging content?

I don’t think there’s a single right answer for this, but I’ll tell you what we do. When we produce a blog post, we then produce a video and short versions of that content. We then link it all back to the mothership content.

That’s how we keep it fresh in terms of different ways of looking at the same content.

When coming up with new ideas, we just borrow inspiration from other companies outside of our industry and tweak it to make it our own. So if Taco Bell does something, I might take what Taco Bell did, tweak it and apply it to another industry.

MF: Honestly, I think we’re going to have to become moviemakers if we want to stay in the game. 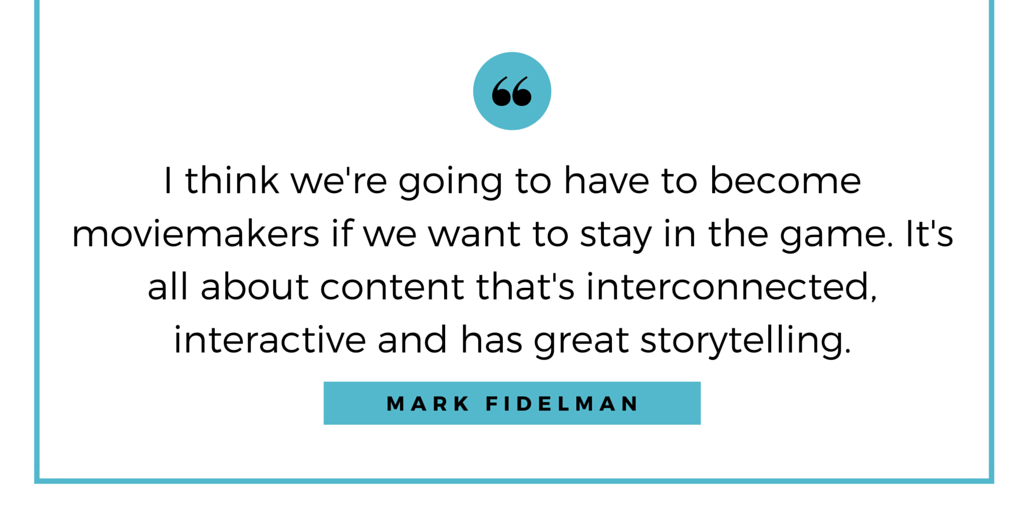 It’s all about content that’s interconnected, interactive and has great storytelling. I just think we’ll have to get very creative because we’ve got new AI and VR coming out, along with all these other new ways of consuming content.

And if they’re affecting your target markets, you’ll have to learn how to storytell within those environments.

KH: Going back to social media, you’ve built an impressive social presence and established yourself as a thought-leader online. What advice would you give to someone looking to become an influencer in their given field?

MF: First of all, you’ve got to be passionate about it because there are going to be times when you feel down and want to quit.

But if you’re passionate about it, you’re going to push past those times. The more you keep building, trying and experimenting, you’ll have more breakthrough moments that get you to a thought-leadership position.

I’ve been putting out videos on YouTube for the last six months, at least once a week. Now we’re at three times a week.

It started off slowly, with a few hundred views. We were thinking “Is this even worth it?” Half a year later, we’re averaging 5,000 views a video. This is arcane marketing stuff — only marketers would be interested in what we’re putting out there.

Push through and recognize that once you’ve built momentum, it’ll start snowballing on its own.

It’s got to be information, content, visuals and audio that target the pain-points — or some kind of emotional point — of your target audience. You’ve got to learn what those points are through trial and error, by surveying them or by asking them.

We’re still trying to figure that out because those points seems to be changing all the time.

I recently did a Snapchat video where I said “Marketers, this is not the time to use Snapchat.”

Got a lot of flack for it, but also got a lot of support for it. That kind of thrust me into this new situation where a lot of people were reaching out that wouldn’t have reached out before, because they’re like “Yes, we have these same experiences with Snapchat — you’re right. What do you recommend we do?”

And that started discussion for additional business for us.

KH: Any opinions or bits of advice you’d like to leave readers with?

MF: Whether you’re just starting out on social media or been involved for years and struggling, my advice is master one thing you’re passionate about.

Just one thing — even if it’s posting your favourite flowers on Instagram. There’s always going to be a big following there. Use that following to move into adjacent areas or other social networks, but be known for one thing initially.

Branch out from there.

Keyhole is a real-time conversation tracker that provides keyword and hashtag analytics for Twitter and Instagram. Get started for free and search your brand now!