Encouraging attendee activity on social media is typically is a measure of an event’s success, but it can be difficult to ensure guests log on and post.

The stats throughout this post are from this Keyhole hashtag and keyword tracker.

Here’s an explanation of how the event became popular on Twitter, which you can use to market your next meetup:

#CMWorld Had Informative Presentations Beyond Its Keynote Speaker

Whereas many events rely on keynote speakers to deliver tweetable quotes and bits of information, #CMWorld gave guests lots to post about.

Although tweets about Mark Hamill — the main attraction and Star Wars star — appeared on the feeds of almost 632,000 users, they accounted for less than 1.4% of total event hashtag reach.

To give another perspective, fewer than 165 users tweeted “Hamill” during the event. That compares to more than 9,400 people who tweeted using #CMWorld. There was a clear spike in activity during his keynote — seeing more than 90 posts at 4 p.m. EST on Sept. 8 — but few tweets before and after the fact.

This is largely because Content Marketing World 2016 offered tweet-worthy material on top of its keynote.

There were 225 speakers in total. These included content heads from well-known companies such as Lego, Visa, Google and LinkedIn. Previews, quotes and recaps of their presentations mostly made up the remaining reach of more than 44 million.

The lesson? Your keynote must be informative and entertaining, but so do the speakers and attractions leading up to it.

The influencers who tweeted using the hashtag have thousands of followers, and some are close to the million mark. The average Twitter user, on the other hand, has fewer than 210 followers.

Leaving out @CMIContent, here are the top five influencers in terms of total impressions generated in the week of the event:

But many users built high impression counts due to the number of tweets they sent. Impressions per post (IPP) takes this into consideration. This metric averages the number of impressions a user generates, showing how many a single post earns.

Based on IPP, here are the top five #CMWorld posters:

Whereas noteworthy social figures may pay to attend quintessential industry events such as Content Marketing World, event and digital marketers running smaller gatherings may have to:

Whether you value IPP or total impressions, both will rise as thought-leaders tweet with your hashtag.

@CMIContent Was Its Own Influencer

The Content Marketing Institute demonstrated a way to boost reach and impressions without the help of influencers, or even other accounts. @CMIContent created the most exposure for its event hashtag by frequently tweeting.

Backed by 538 tweets throughout the week of the event, the account earned more than 97 million impressions for #CMWorld. That’s more than twice the number of impressions generated by the combined efforts of the top five influencers.

So, how did the institute’s social strategists post during the event? They: 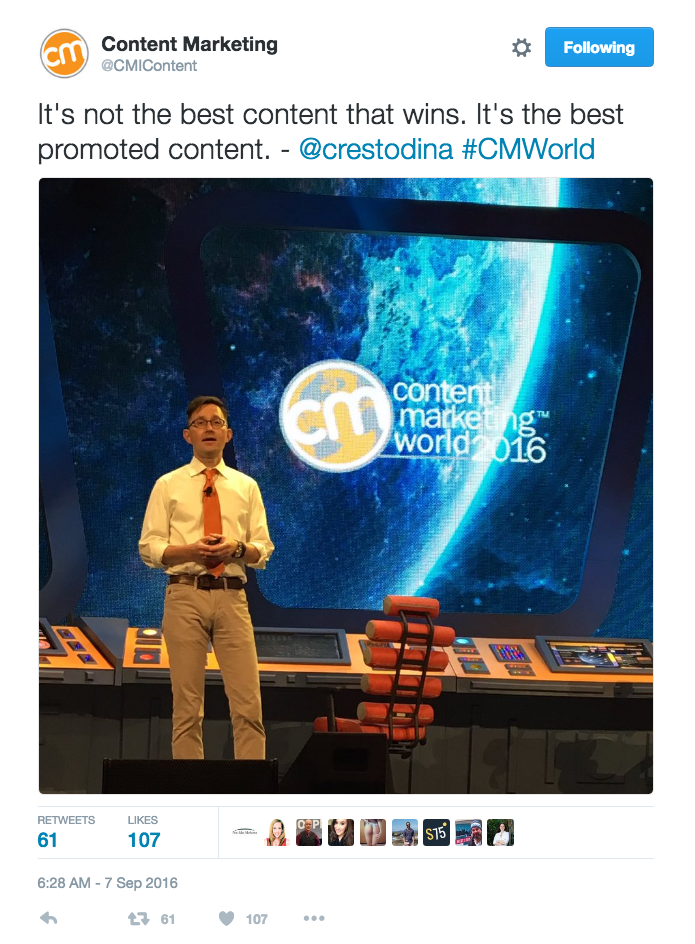 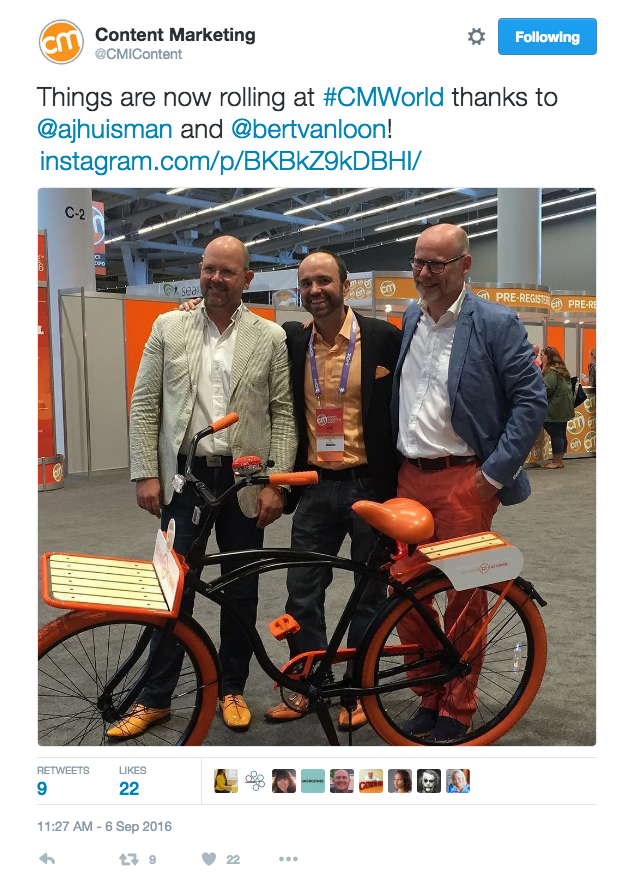 These tweet ideas will help you reach more users without the help of influencers. But who knows? A few thought-leaders may wind up retweeting you anyway.

Since the general purpose of a hashtag is to drive and categorize conversations, tweeting once and ignoring other users can limit its effectiveness.

Doing so draws attention to neither the trend nor discussions around it. So, many events that are social media smashes — such as #SMMW16 — encourage users to repeatedly tweet with the hashtag.

#CMWorld is also an example of this.

How did #CMWorld encourage users to post? And how can you do the same? Try to:

Discourage one-and-done tweeting using similar approaches, and your next event should see a rise in hashtag reach.

Events differ based on their goals and audiences, but marketers and organizers can study Content Marketing World 2016 to learn about encouraging guests to participate on social media.

Getting your hashtag to appear on 45 million unique timelines may seem out of reach. But as #CMWorld shows, it may be more realistic than you think.