Many marketers and community managers shape their social media tactics by looking at case studies of successful strategies.

But isn’t learning what not to do just as beneficial? John Dewey, an American philosopher and educational reformer, taught that learning from mistakes and successes were equally important. 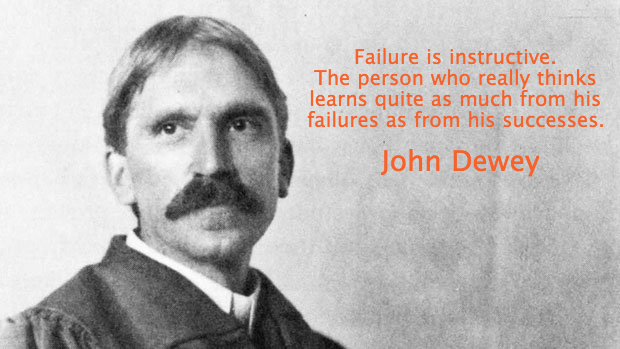 This is where examples of social media fails prove their worth.

Here are 10 hashtag trend and campaign fails by big brands, plus lessons you can learn from them:

The runner-up in the 2009 edition of Britain’s Got Talent reclaimed social media spotlight for her 2012 album release.

This time, it wasn’t Susan Boyle’s music that catapulted her to Internet fame. It was the hashtag her PR team used to celebrate the release: #susanalbumparty. 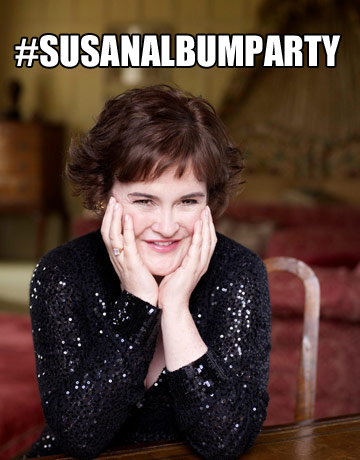 Not many people seemed to read the hashtag as “Susan album party.”

The team deleted and changed the hashtag to #SusanBoylesAlbumParty, but not before it caught on. Users created mock invitations to Su’s special get together. The group behind the tweet declined to comment, indicating the original hashtag was a mistake.

The Lesson: Watch your phrasing.

Read your hashtag out loud. Read it in your head. Repeat the process until you’re sure its meaning is clear.

In this case, capitalizing each letter – turning the campaign into #SusanAlbumParty – likely wouldn’t have worked. Many in the twittersphere don’t use upper case letters.

Note: If you want to track hashtag fails not on this list, try using Keyhole.

Another example of how critical it is to grasp public sentiment, the Victorian Taxi Association launched #YourTaxis in November 2015. The campaign’s goal was to encourage people to share experiences using taxis in the Australian state.

Hundreds of users posted about being verbally, sexualy and physically harassed by drivers.

Surprisingly, it gets worse.

The @YourTaxis account posted two days later – not to apologize, but to promote a Remembrance Day campaign with the same hashtag. On top of bragging about its service to veterans, the company misspelled “remembrance.”

Unsurprisingly, the feedback was negative. The association fired its agency, Ellis Jones, and finally apologized.

The Lesson: Have a contingency plan.

Stop tweeting when a campaign turns sour. Reassess it, and consider an apology or new direction.

Better yet, create a strategy for campaign flops. By knowing how to handle negative tweets beforehand, you should be able to resolve issues faster.

The largest bank in the United States held an open Twitter chat months after receiving a $13 billion government settlement in November 2013, after knowingly selling faulty mortgages leading up to a national housing crisis.

The Q&A was a success in terms of activity volume. It was the opposite in terms of the questions.

The company quickly cancelled the session. But #AskJPM is still floating around Twitter.

If your company just received billions in taxpayer dollars after acting as a catalyst in a country-wide financial meltdown, don’t hold an open social media chat.

In any other case, it’s still best to understand how your target audiences feel about your brand before directly interacting with them.

The tweets were overwhelmingly negative, as users posted experiences of vomiting after eating and finding waste such as fingernails in patties. Even PETA joined in, claiming that McDonald’s didn’t use real chicken.

The fast food franchise removed the promoted hashtag in less than hour.

It’s difficult to anticipate in which direction an unspecified CTA can lead.

But when your brand has a mixed public perception, it’s easy to see how users would run with it in a negative direction. The trend can also snowball as more people catch on, turning it into a trending topic.

In July 2011, Entenmann’s told Twitter followers they should feel #NotGuilty about eating the brand’s low-calorie sweets.

The hashtag was already trending. But it wasn’t because of past Entenmann’s tweets. “Not guilty” was the verdict of the Casey Anthony trial, which revolved around the death of her two-year-old daughter.

The twittersphere largely didn’t appreciate the post. And social media reporters were quick to cover the story.

Entenmann’s deleted the tweet and apologized. The public relations team claimed ignorance, but the twittersphere can’t be certain if it was accidental.

The Lesson: Refrain from jumping into a trending topic without understanding its context.

If you want to include a popular hashtag in a tweet, look at how people are using it. If the conversation strays too far from your brand’s messaging, it may be best to scrap your idea.

During a near 30-year reign over Egypt, citizens began to rebel against president Hosni Mubarak. His rule was associated with few jobs, poor living conditions and wasted national resources.

Despite Egyptian officials shutting down Internet access across the country, social media users managed to get messages out. #Cairo trended as a result.

That’s when Kenneth Cole tweeted that a Cairo store selling the designer’s new spring collection was the revolution’s root.

Despite later apologizing and deleting the tweet, Twitter users didn’t hesitate to share their opinions. Nor did major news outlets, as publications such as CNN and Mashable wrote articles about the incident.

Adding a touch of humour to your social media approach can increase engagement, but #Cairo shows joking about heavy political issues goes too far. It can still boost interaction numbers, but not for reasons to be proud of.

After a customer tweeted that US Airways ruined her spring break, the airline responded by asking her to contact customer relations.

But instead of sharing a link to the contact page, it led to a picture of a woman performing a sex act with a model Boeing 777.

The twittersphere joked about airplanes and flight patterns, propelling #USAirways to a top 10 trending topic. 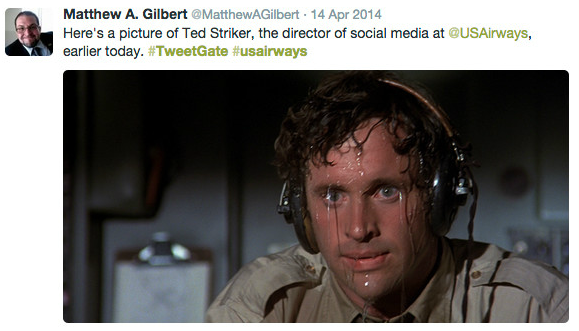 The company apologized, saying it would review its social media processes and not fire the person behind the tweet. After all, the image wasn’t a US Airways creation. The social media team had saved the link, which was posted by another user, to alert Twitter support.

The Lesson: Double-check the links you send.

There’s more to proofreading tweets than going over the copy. Follow links to ensure they lead to the right pages. You should do this before sending them, ideally.

During the height of the Ferguson protests in 2014, which made police brutality one of the most prominent conversation topics in the United States, the department started #myNYPD. The campaign encouraged citizens to post images of officers in action.

People tweeted 10,000 times an hour during the hashtag’s height.

But they were mostly images of police brutality – officers striking and gaining up on protesters. 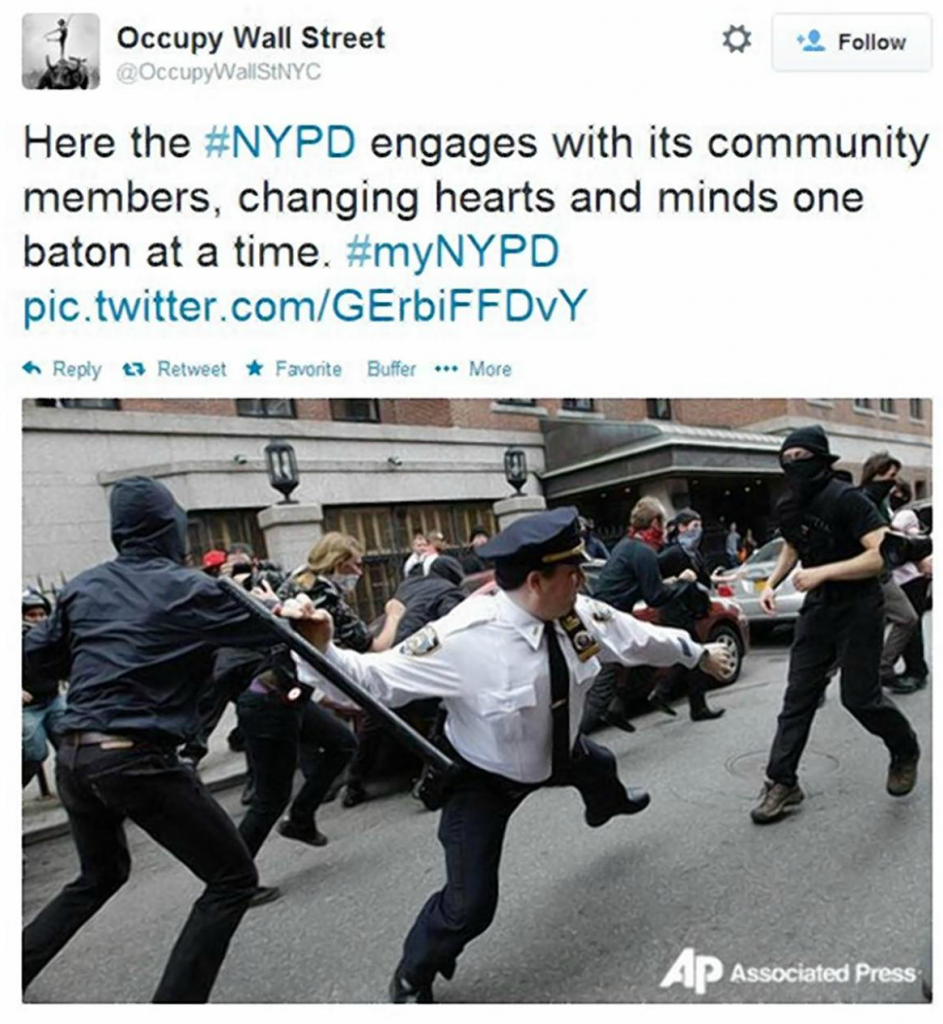 The Lesson: Don’t create self-absorbed campaigns when you have an image problem.

#myNYPD shows you shouldn’t try to win back public opinion in one swoop – especially by asking for user-generated content.

Like what happened with #AskJPM and #McDStories, social media can be an outlet to vent frustration.

Australians saw #CoalisAmazing – a campaign by the country’s minerals council – trend during September 2015.

The hashtag developed in response to an ad that praised the “little black rock” for creating jobs.

But wide use of the hashtag was in mock of the campaign.

At the time, environmentalists were fighting against the approval of large mines across the country. They tweeted about lung diseases suffered by miners and other drawbacks of using the combustible rock. 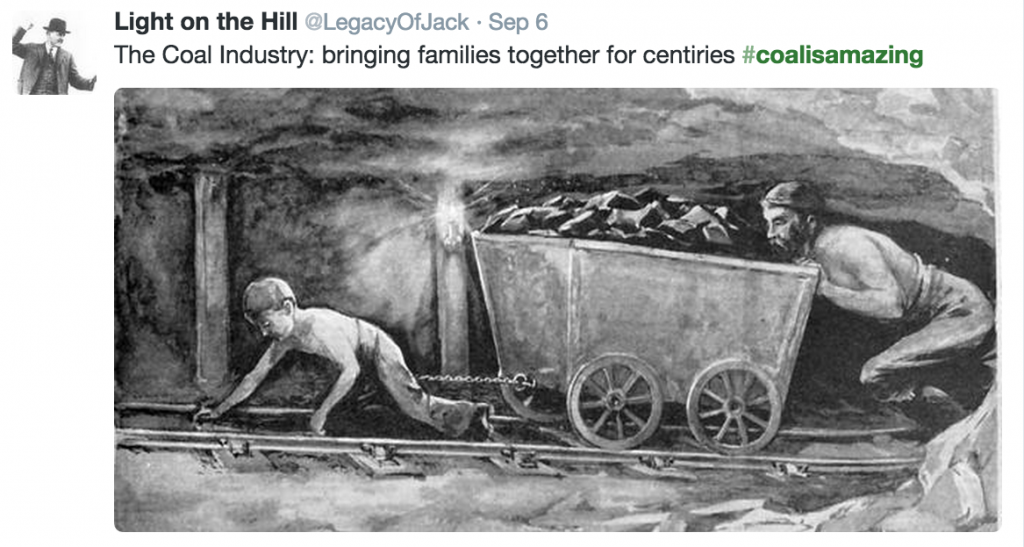 The council denied the campaign’s failure.

Instead, the coal division’s executive director thanked users. He said using the hashtag – no matter the content of the tweet – was a way of supporting the ad’s messaging.

Blatantly bragging about your product is usually a flawed strategy. That’s because:

Instead, the campaign could have framed the importance of energy to society. By doing so, coal could have been an aspect of the ad instead of its blatant focus.

#gettngslizzerd was not a planned trend, but the American Red Cross popularized the hashtag in an accidental 2011 post.

Tweeting through the wrong account using Hootsuite, the organization’s social media marketer said she was looking forward to a beer-filled weekend. 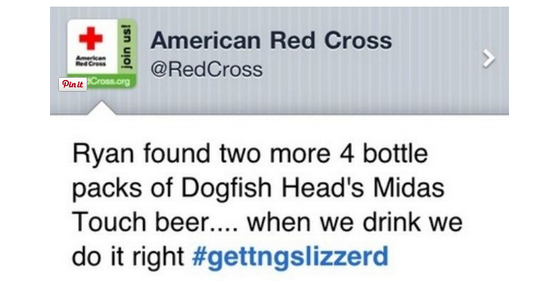 Unlike the last nine entries, this one has a happy ending for everyone.

The American Red Cross owned up to the mistake after about an hour, apologizing and deleting the tweet.

Plus, the beer company in question hopped into the conversation. Dogfish Head Brewery encouraged its followers to donate to the non-profit organization using #gettngslizzerd.

The Lesson: Turn mistakes around with sincerity. And watch which account you’re on.

Admitting you made a mistake and saying sorry can help shift the discussion from negative to positive territory. With that in mind, the Red Cross’s mistake was relatively harmless. Political or ethical blunders may call for more action.

Of course, the social media manager could have avoided the mistake just by being careful on her dashboard.

Although these 10 trend and campaign hashtag fails by big brands each offer a unique lesson, the organizations behind them could have avoided their mistakes by doing one thing in common.

By thinking about the hashtags from an audience – instead of internal – perspective, the marketing teams should have realized they were bad ideas.

That’s another social media lesson in itself: Always place yourself in your followers’ shoes when sharing content, answering questions and running campaigns.